A downloadable game for Windows and Linux

The goal of the game is to guide the little green slime around a map, and collect lollipops. New maps can be created using the editor. This game is based on the SDL2 Strategy tutorial, by Parallel Realities.

The editor / game must be run from the command line. See below for how to use each.

Run with sdl2Editor -edit <map name> to edit a map.

0: Toggle mini map on and off

Mouse controls depend on the current mode (tile / entity / pick):

Certain entities cannot be removed, such as the player character, the red flag, or the green flag. Attempting to place another instance will move the existing one. They can be moved around in pick mode.

Run with sdl2Editor -map <map name> to play a map.

This will start the game in game mode, playing a map called "example" (loaded from data/maps). When in editor mode, the following controls are in effect:

It is also possible to double jump by pressing I again while in the air.

The goal of the game is to collect all the lollipops and make it to the green flag. If you touch spikes, you will die, and be restarted by the red flag.

When the green flag is touched and all the lollipops have been collected, the game will automatically exit.

(note - there are no sound effects or music) 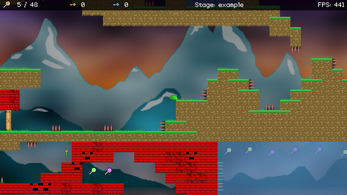 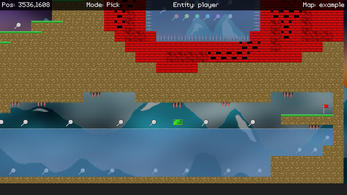 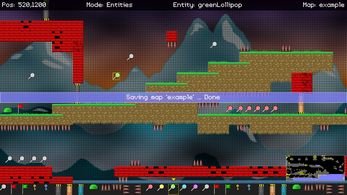